Skip to main content and our Accessibility Statement may be found in the footer of our website.
Back To Blog

There will be an estimated 62,000 new cases of thyroid cancer in the U.S. this year. It is more commonly diagnosed at a younger age than most adult cancers. Nearly two out of three cases are found in people younger than 55 years of age.

The thyroid is an endocrine gland that is normally found in the lower neck area. Its job is to make thyroid hormones used in many bodily functions such as using energy, staying warm and keeping other organs functioning properly. Thyroid cancer is rare when compared to other cancers and is usually very treatable with less than 2,000 deaths per year. 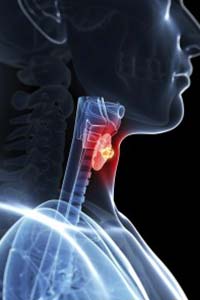 Thyroid cancer normally begins as a nodule or lump in the neck. This nodule is often the only symptom a patient will have and is often discovered during routine physical examinations or through a thyroid ultrasound. It is also common for patients to notice these lumps themselves. Sol Guerrero, MD, said, “Recently, as imaging methods have become progressively more advanced, the discovery of these nodules has incidentally increased.” Besides these lumps in the neck, the only other symptoms may be pain in the area due to the mass.

Thyroid cancer is more common in women and those who have been exposed to high amounts of radiation, especially to the head or neck. Smoking and a family history of thyroid or other forms of cancer will further increase one’s risk.

Dr. Guerrero says that once a nodule is found in a patient, a biopsy will be the next course of action in determining a diagnosis of thyroid cancer. Less than one in 10 nodules harbor thyroid cancer. If the biopsy comes back positive for cancer, she says the most common treatment option will be surgery to remove the nodule. Once the surgery has been completed, radioactive iodine therapy may be the next course of action, as it can effectively destroy the remaining cancerous tissues.