Skip to main content and our Accessibility Statement may be found in the footer of our website.
Back To Testimonials

I was diagnosed with Parkinson’s disease in 2009 and I was put on medication for six years before I met Dr. Arif Dalvi, a neurologist specializing in Parkinson’s disease and movement disorders. Dr. Dalvi is an expert in Deep Brain Stimulation (DBS) programming which treats the uncontrollable shaking and tremors associated with movement disorders, such as Parkinson’s disease. Dr. Dalvi, along with Dr. Lloyd Zucker, a neurosurgeon on staff at Delray Medical Center, performed two surgeries to implant electronic leads in my brain, which connected to a neurostimulator in my chest. Dr. Dalvi can program the neurostimulator to send electric impulses to my brain, affecting my sense of smell, sensory processes and signals, motor systems in the brain and in controlling the motor systems of the brain which are responsible for voluntary bodily movement and coordination. These brain impulses help slow or shut off my tremor caused from Parkinson’s disease.

First, Dr. Dalvi mapped my brain using microelectrode recording during an MRI and other consults. I wasn’t even asleep while the neurosurgeon, drilled the hole. Then, Dr. Zucker implanted electronic leads in my brain. During the second surgery, Dr. Zucker implanted the neurostimulator in my chest and Dr. Dalvi assisted by testing the leads in my brain that Dr. Zucker connected to the neurostimulator. I was awake during both procedures. 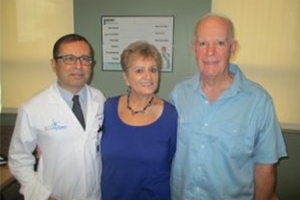 Dr. Dalvi connected the neurostimulator to the thalamus in my brain to control my tremor. I could hear the drill and I heard them say, “irrigation and suction.” There’s no pain, you can just hear everything. Dr. Dalvi was checking my joints during the surgery. He would ask me to touch my nose and put my arm out. Then, Dr. Dalvi programmed the neurostimulator during the surgery and I was watching as my shaking tremor stopped, which was remarkable.

I see Dr. Dalvi at his PBNI office in West Palm Beach about every three months and he tweaks the neurostimulator with his computer that is connected to the device. He’s always monitoring my health with this technique. Dr. Dalvi is very confident and I like that. He has conducted over 500 DBS surgeries and Dr. Zucker has completed over 150 DBS surgeries.

A good year before the tremors started, I lost my sense of smell. I found out later that is a symptom of Parkinson’s disease. But, you wouldn’t realize that if you weren’t familiar with the disease. If you have loss of smell, go see a neurologist. I think sometimes when we get older we take things for granted and that’s what I did.

Prior to finding Dr. Dalvi, I was going to a neurologist in Boca Raton. He was treating me with Botox, which didn’t seem to do anything.

“My lip was numb after a hospital stay and I went to my primary care, which sent me to a neurologist. When I told them my husband has Parkinson’s disease and the staff all said to us, you have to see this Dr. Dalvi, he just came here from Chicago, and he does this procedure no one else does around here. We made an appointment with Dr. Dalvi that same day,” said Marie Brier.

The first time he turned on my neurostimulator, it felt tingly for a second, but since then I haven’t felt anything.

Today, I can punch in numbers on my cell phone and even text. I couldn’t do that before my tremors were treated with DBS. I can play solitaire on my iPad. Simple things like that – it’s quality of life – which is better. I always carried a cup of coffee in my left hand because I’m a lefty and before this surgery, I would spill it before I got over to the couch. 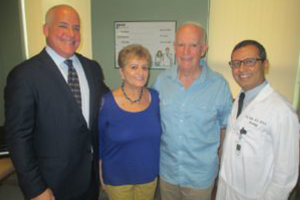 “Before this surgery, he would fall all over the place. He broke two windows in the house. He actually fell into the window, but he fixed them before I got home and never told me about them,” said Marie.

We’ve been married for 27 years. We went to high school with each other and knew each other as kids, were never an item, until our 20th high school reunion, which was our first date. We’re from Scranton, Pennsylvania. I was a teacher and swim coach for 32 years. I was always active and swam competitively, freestyle and butterfly mainly. When I came to Florida, I would swim a mile every day. That’s something that has gradually digressed. I do a half-a-mile now. I walk the shallow and swim the deep. I had a rule, I wouldn’t go anywhere without riding a bicycle. Now, I have a five-mile course charted. Exercise is better than medicine.

We go to a church, Unity of the Palm Beaches, which believes in meditation along with prayer and everything else. My meditating and breathing helped me through this whole thing. They put in the church bulletin when I was having surgery and we had at least 200 people praying for me. We definitely believe in the power of prayer. What a miracle! Our prayers worked. Today, I have my confidence back and I expect to live a long life.